My thoughts on the new Carbon GT

Im sure that loads of people with the board will be posting pictures and videos on the facebook groups (as will I) but this is here for anyone that doesnt know about them yet. The groups are Evolve Skateboard Owners and Evolve Carbon GT Owners. Everything below is my own opinion and as such will be very subjective! This was a beta version that I borrowed for an hour. 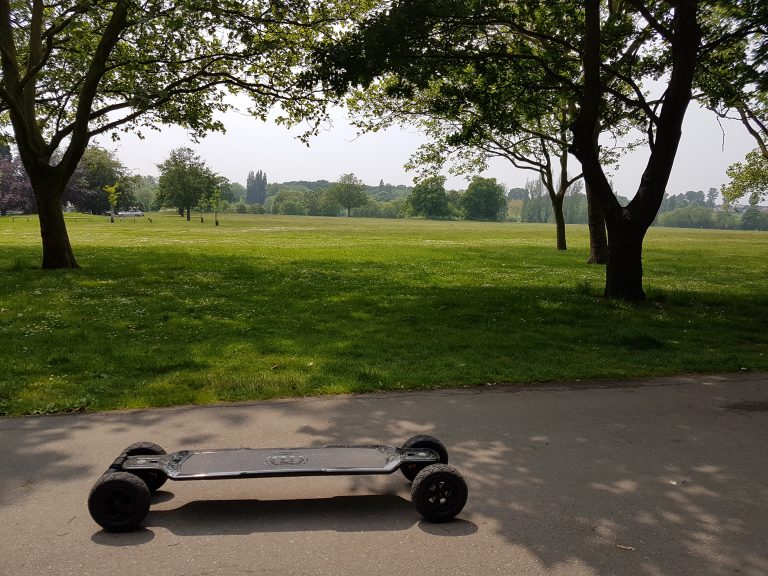 Changing from Street to AT

The first thing that needed to be done was swap over from street to AT. It’s as easy as removing all the wheels and belt cover and then putting on the new ones. With manual tools this took us about 10 minutes but if you had the right tools ready and a ratchet or power drill I think it could be easily done in under 5.

In my eyes, Jeff and the chaps at Evolve have got almost everything right here! I really liked the shorter board, although it took me a while to get used to but once I had it was really well balanced even when I was full trigger in GT mode!! The main bit of the deck is slightly lowered which I like as it allowed me to easily find my foot positions. While I was playing with the GT (route) I tested it tarmac, gravel, dirt and grass. Where it really shines for me in comparison to my carbon is grass and loose ground. On the carbon, you sometimes loose traction when turning because you don’t have enough downforce on the drive wheels to get the grip you need. With the GT off road it really came into its own! It has just sheer power on loose ground and even when turning it felt really solid underfoot. I also really liked the 7″ AT tires they coped with everything I did. My final comment is that this thing needs respecting!! At one point I tried to set off in GT and it just threw me off. Even in fast you really need to brace yourself at the start.

One thing that I didn’t like was the new remote. Technologically its gone in the right direction with more information and speed available on the little screen etc however when I was out, in the sunshine it was really hard to tell what speed mode I was in. And for me when I was in GT mode running full throttle I was concentrating so much that I did not want to move my concentration anywhere else to see what speed I was doing. Im sure this wouldn’t be as much of a problem for a more experience skater though. The new battery monitor is a nice feature however it would be useful to know how accurate / reliable it is in the long run. In total I did about 6 miles and was pretty heavy on the throttle with a couple of reasonable hills. Started off at 79% and went down to 34% when I gave it back. Secondly its much noisier when in AT than the Carbon, this took a bit of getting used to but actually worked out a bit better because people could hear me coming.

While I am by no means an amazing skater, I thought I would share my thoughts anyway. I can only describe this as the McLaren P1 (British supercar) of electric skateboards. It looks great, rides amazingly and has so much acceleration it scared me at times! A couple of questions that have been asked I can hopefully answer. The first is will stones get into the little holes on the motor? No, the cover of the motor is the part that actually rotates so it would be highly unlikely that any solid material will get in there. Secondly a lot of people have asked if it is waterproof? I have actually seen inside the GT and can say that it is not waterproof! If you want to know more, or find a distributor take a look at the Evolve website and if you have any questions fire them to the facebook groups and someone will be able to answer them.

My name is Ryan Diver. This is my work in progress blog.

The dark side of Industry 4.0 and its sustainability